Gorilla Shot in Cincinnati Zoo After Boy Falls into Habitat

Zoo officials have shot dead a gorilla after a four-year-old boy fell into its enclosure in the US city of Cincinnati.
The boy climbed through a barrier and fell into a moat, where he was grabbed and dragged by the gorilla.
The zoo said it took action to shoot the 400lb (180kg) gorilla as the situation was “life-threatening”. The boy is expected to recover.
Last week two lions were shot dead in a zoo in Chile after a man entered their pen in an apparent suicide attempt.

Cincinnati zoo has temporarily shut its gorilla exhibit following the incident on Saturday.
The boy had fallen about 10ft into the moat. Video shows the boy being dragged through the shallow moat. The gorilla then stops, with the child below him and looking up at him.
But the boy was reportedly dragged by the 17-year-old male western lowland gorilla named Harambe for about 10 minutes.
The child was taken to a local hospital and although no information about his condition has been released it is believed he will recover.

[The officials] made a tough choice and they made the right choice because they saved that little boy’s life. It could have been very bad.”
He said a tranquilliser would not have had a quick enough effect.
Mr Maynard said that although the boy was not under attack, he “certainly was at risk”.
He added: “We are all devastated that this tragic accident resulted in the death of a critically-endangered gorilla. This is a huge loss for the zoo family and the gorilla population worldwide.”
Two female gorillas in the enclosure did not approach the child and were unharmed.
Harambe was born in captivity in Texas and moved to Cincinnati zoo in 2014, where it was hoped he could be part of a breeding programme. Cincinnati zoo has had the largest number of western lowland gorilla births in the US.
Protective
In a similar incident in 1986 on the island of Jersey, a Crown dependency of the UK, a five-year-old boy fell into a gorilla enclosure.
He lost consciousness and a silverback gorilla called Jambo famously stood guard over him, protecting him from other gorillas and stroking his back. When the boy came round he started to cry and the gorillas retreated, allowing keepers to rescue the child, Levan Merritt.
A life-sized statue of Jambo fetched $26,000 at auction and he even appeared on Jersey stamps.
The western lowland subspecies inhabits west African rainforests and is the most numerous, although exact figures are not known. There are more than 500 in zoos worldwide.
The shooting of the lions last week in Santiago, Chile, brought criticism from activists. Zoo officials said no fast-activating tranquillisers were available.
The man had jumped into the enclosure and stripped naked. 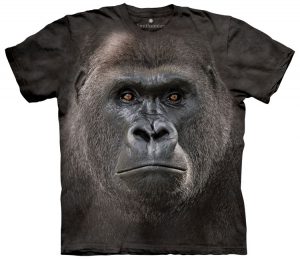